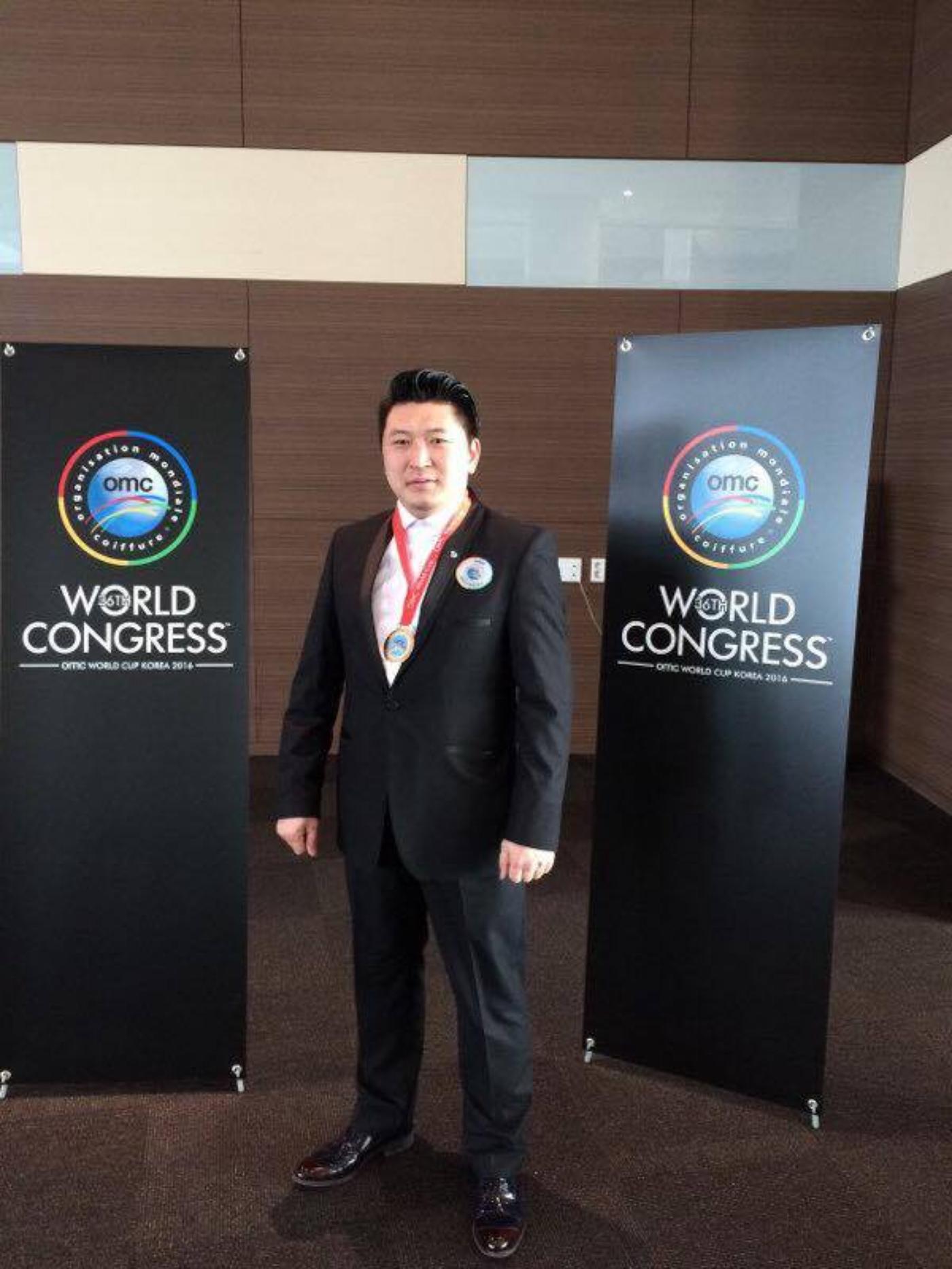 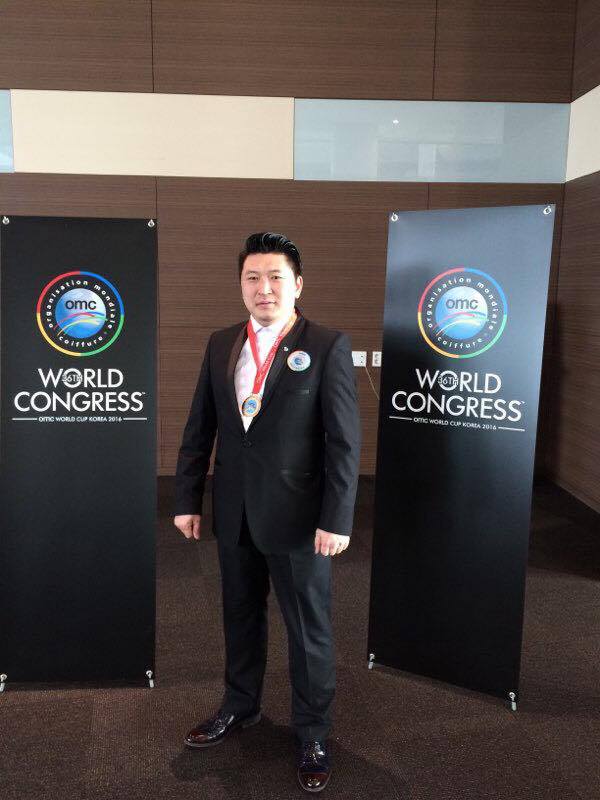 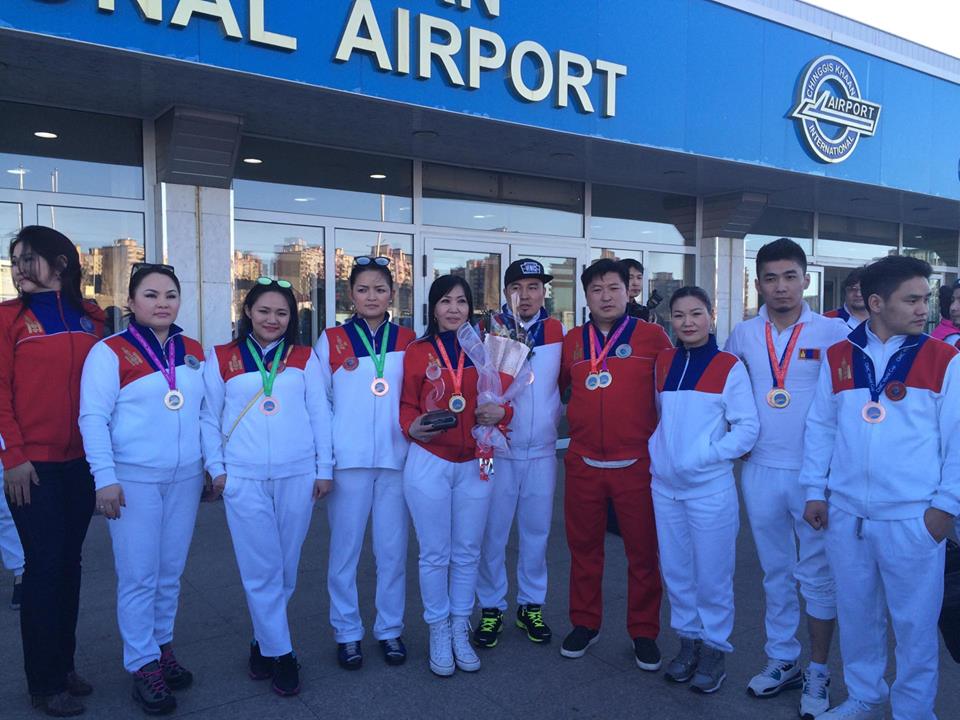 A Mongolian team of hairdressers recently competed in the World Hairdressing Championships: OMC Hairworld 2016, which took place from March 27 to 29 in Seoul, South Korea. Over 1,600 participants from 50 nations competed on the opulent Korean stage. Mongolian hairdressers excelled in the Senior Gents Creative category, in which S.Munkhnasan won a gold medal, N.Altanshagai came in fourth place, and G.Gantsooj placed ninth. The Mongolian team ranked third in the Senior Gents Technical Team competition and the Ladies Aesthetics Team competition, and placed seventh in the Senior Ladies Fashion category. The following is an interview with the head of the Mongolian Association of Hairdressers and Cosmetologists (MAHC) and master hairdresser of Sky Salon, D.Odkhuu, about the OMC Hairworld 2016. Congratulations for getting a world champion hairdresser from your association. How big was the scale of this year’s OMC Hairworld? How many Mongolian hairdressers and cosmetologists took part in the event? This year is the 70th anniversary of the Organization Mondiale Coiffure (OMC), the largest professional hairstylists’ organization in the world. Mongolia joined the organization during its 60th anniversary, but it’s the 35th time we’re competing in the OMC Hairworld. A Mongolian hairdresser became a champion this year in the Senior Gents Creative category. That person is S.Munkhnasan, the master hairdresser at Vidal Salon. Director of Khos Shagai Salon N.Altanshagai came in fourth place and our male hairdressers’ team came in third in another category. Not only hairdressers but also cosmetologists participate in this competition. We had a relatively big team because it was hosted in the Republic of Korea and the expenses were more reasonable. In total, 34 Mongolians competed. We took along our models for better performance. Our hairdressers won Grand Prix and became champions of Asian and European competitions before. I’m very happy that one of them became a world champion this time. This is probably the result of 10 years of continuous participation in various competitions. Can you share your personal achievements as a hairdresser? I became an Asian champion in the men’s hairdressing category. Since 2009, I’ve been working as a judge and coach. I was one of the judges at the OMC Hairworld 2016. It isn’t easy judging 180 to 200 hair styles a day. I still had to try hard because an internationally renowned competition chose me as a judge. I’ve been leading the Mongolian team in the last six years.

Probably only the media are interested in hairdresser and cosmetologist champions. The state doesn’t give us any support. We pay for our expenses whenever we take part in a competition.

The state provides financial support to athletes and artists competing in international competitions. It also rewards them if they make an achievement. What kind of support did your team receive? All three million Mongolians celebrate when a world champion is born from sports, arts and cultural sectors, but not for champions of specialized occupations. Probably only the media are interested in hairdresser and cosmetologist champions. The state doesn’t give us any support. We pay for our expenses whenever we take part in a competition. Our sector fell after Mongolia’s transition to a free market economy in the 1990s. The state doesn’t regulate or support our sector at all. So we founded the MAHC in 2006 in hopes to unite hairdressers and cosmetologists. The participation fee alone costs 800 USD. It costs 200 to 300 USD per mannequin head used at the competition so there are many difficulties. Each person spends a minimum of seven to eight million MNT. Even so, we participate in various competitions at our own cost and with encouragement from customers. A government resolution for rewarding hairdressers and cosmetologists who make special achievements at regional and international competitions was passed in August 2012. It specifies that 40 million MNT will be granted to world champions and 20 million MNT for regional champions, but our Asian and European champions weren’t rewarded because the money wasn’t allocated in the state budget. I hope that this time’s achievement will not be left unrewarded. Can you reveal how much the world champion received from the OMC Hairworld 2016? Honestly, there was no cash prize. Some people think that we receive high cash prizes like other sectors. The OMC organizes this competition to evaluate and commend the skills of hairdressers and cosmetologists, not to give cash prizes.

Experts worldwide noted that Mongolians are very passionate and ambitious. One of the OMC representatives said that Mongolia joined the organization last, but shows tremendous amount of passion.

Would you say Mongolian hairdressers are ranked high in terms of their skills? Hairdressers from which country are respected most? What’s their specialty? Yes. We’re quite successful in several hairstyling categories. Hairdressing competitions are conducted in many different types of categories. During the competition, judges noticed that Mongolian hairdressers have outstanding skills for styling men’s hair. Italian, Polish, French, Japanese and Korean hairdressers always do well in regional and international competitions. Besides hairdressing and cosmetology sectors being developed in these countries, they also produce hair care and cosmetic products and equipment. While Mongolia was just starting to develop the household services industry in 1946, France and Italy hosted the World Hairdressing Championship. Mongolia took part in this competition for the first time 60 years later, in 2006. Experts worldwide noted that Mongolians are very passionate and ambitious. One of the OMC representatives said that Mongolia joined the organization last, but shows tremendous amount of passion. That person judges hairdressers and cosmetologists from 68 nations but said that even though Mongolia is the youngest member, it’s the strongest competitor. You judged the OMC Hairworld 2016. How fair was the judging? Judges from international hairdresser and cosmetologist associations have very strict rules and principles. Only eleven out of 90 people with judging rights were chosen to judge the OMC Hairworld 2016, after reviewing their ethics, judging skills, artistic sense and education. If a judge gives extremely high scores to support his or her team, that person’s judging rights are stripped off. For example, let’s say that I gave 30 points to the Mongolian team when it was worth 25 points and that other judges gave 25 points. In this case, I will be disqualified as a judge because I can give two points more or less than the average score from other judges. If a judge’s evaluation exceeds that limit, it is viewed that the judge lobbied, had personal ambitions, or is unskilled. Artists need at least a tiny bit of talent. What qualities should a hairdresser have? I’ve been working as a hairdresser for 20 years. From my many years of experience, a hairdresser must have a good taste and good imagination. They need to consider what kind of hairstyle would suit a customer and how to help conceal their facial flaws. If the hairdresser doesn’t have that skill, the customer and hairdresser only differ by the fact that one sits down while the other stands. Participation in local and international competitions is essential for hairdressers to keep up with trends and improve creativity and taste. Why did you decide to become a hairdresser? Hairstyling and cutting was my hobby since I was in high school. My brother had a Russia hair clipper and I would use it to cut my friends’ hair. I would also use sewing scissors. While other children went to college and university after graduating, I worked at a hair salon. Majority of hairdressers are women. Yet, more male hairdressers seem to be successful. Does gender matter in this? Do men have better imagination than women? Rather than differences in gender, I think it’s to do with the amount of time people can dedicate to their work. Internationally, more male hairdressers participate in regional and world championships than female hairdressers. Seventy percent of participants and 90 percent of judges are men. Compared to men, women have to focus mainly on their family and children. They have no choice but to take some time off during their career to give birth. Men are completely focused on their work while women are on maternal leave. This is probably the reason. Do hair models affect hairdressers’ overall score? Most Mongolians have thick, rough and dry hair. Does this impact hairstyling? Nowadays, fewer competitions demand hairdressers to have hair models. It’s economically efficient to use mannequin heads during competitions because we can save costs for traveling with hair models.

Members of Nuance Armenian ethno jazz band are my frequent customers. As for the political world, I’ve been serving former Prime Minister S.Batbold’s family for over 10 years.

How are mannequins and models chosen? Do hair models have to be tall and pretty? Models are chosen based on whether their face and overall look can change with hairstyling, instead of whether they have a pretty face. But of course, they should have a small face and good facial proportion. We don’t prefer tall and pretty models. Mongolia doesn’t have its own hair care and treatment products apart from Khalgai (Thistles) shampoo. Most locals have trouble choosing hair dye. Do hairdressers also face this kind of problems? We hardly get any issues from using brand products such as Loreal, Londa, Wella and Shchwarzkopf. Hairdressers can connect and don’t face language barriers despite their nationality. My fellow hairdressers and I enjoy joking that our occupation doesn’t have any language barriers. We don’t lose points regarding the usage of foreign products. Whether it’s in Germany or Russia, we can train and work in any country without encountering language-related problems. Experience is what matters for hairdressers. Speaking of experience, how many years of experience do Mongolian hairdressers who compete in regional and international competitions have? They have at least three years of experience. In general, they have three or more years of work experience. Do you assist artists, athletes and politicians with their image? I have many close friends in the arts and cultural world. Members of Nuance Armenian ethno jazz band are my frequent customers. As for the political world, I’ve been serving former Prime Minister S.Batbold’s family for over 10 years.