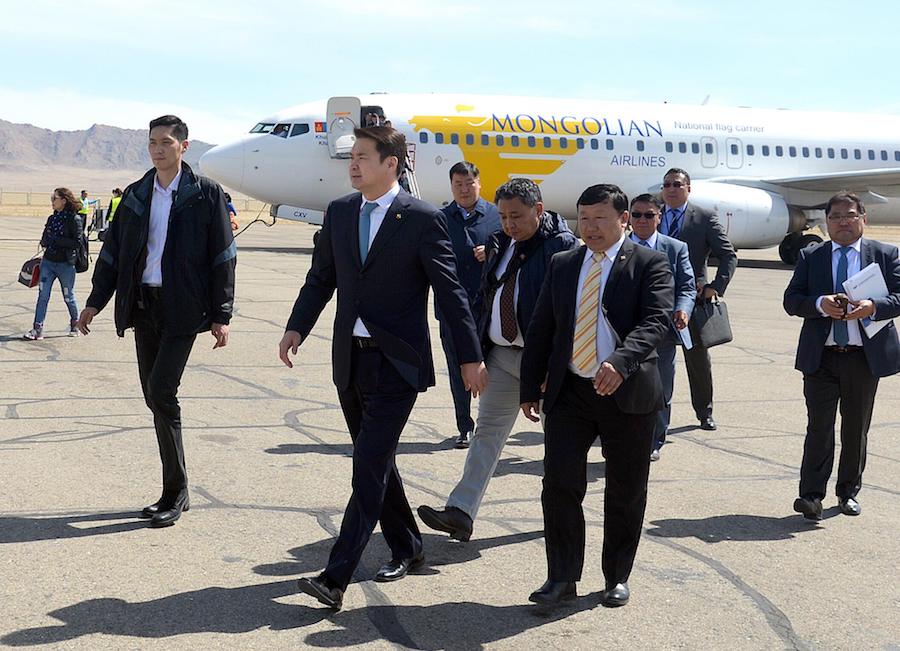 Prime Minister Ch.Saikhanbileg arrives at Khovd province's airport[/caption] Prime Minister Ch.Saikhanbileg conducted a working visit to the western provinces, meeting with officials and residents of Uvs, Khovd and Bayan-Ulgii provinces from April 21 to 23. New flight to western provinces opens doors for domestic air transportation In Khovd province, Prime Minister Ch.Saikhanbileg attended a ceremony for the arrival of the first flight of MIAT’s Boeing 737 from Ulaanbaatar to the western provinces. During the ceremony, the Prime Minister highlighted that Khovd Province should become an essential link in Mongolia’s air transportation and construction development. He stressed that he was witness to a significant event in the history of Mongolia’s civil aviation and transportation sectors. The Prime Minister noted that he expects Khovd Province’s airport to become a larger airport as a result of the launch of the large aircraft flight between Khovd and Ulaanbaatar, and added that Khovd, home to a variety of of ethnic minorities, and other western provinces should become tourist attraction centers. Minister of Roads and Transportation M.Zorigt, who accompanied the Prime Minister on his visit, emphasized that the goals of air transportation sector officials have materialized with the launch of the large aircraft flight, and added that the next phase of work is to launch flights with large airplanes to the eastern provinces. “As a part of this project, the airport of Choibalsan, Dornod Province, will be rebuilt and maintained.” Road travel from Ulaanbaatar to Khovd Province takes two days, and can cost nearly 100,000 MNT. The flight from Ulaanbaatar to Khovd takes only two hours at a  cost of 200,000 MNT. Uvs Province improves housing and healthcare During his working visit to Uvs Province, the Prime Minister learned that the population of the province has reached 80,900 people over the last five years. In recent years, Uvs Province has experienced pleasant winters, resulting in the survival of healthy livestock. "As of the end of 2014, a total of 25.6 million heads of livestock  were registered. One of leading sectors besides livestock herding in Uvs is farming. Uvs Province has been meeting the flour needs of the three western provinces. Also, investment in Uvs Province has doubled in the last four years,” an Uvs Province official told the visiting state delegation. Uvs has built a medical treatment and diagnosis center with 2.3 billion MNT in financing from the Prime Minister’s budget package. The number of people visiting Ulaanbaatar to undergo medical check-ups has been cut in half since the new medical center opened. The Prime Minister learned that Uvs Province has had around 70 cases of measles in the last two years, and that the spread of measles has been reduced. Uvs is successfully implementing its own Street Project, paving 10.5 kilometers of road, 14.5 kilometers of sidewalks, and 2.1 kilometers of bicycle paths, also upgrading its underground engineering network. The province built a 127 meter bridge over the Tes River at a cost of 2.9 billion MNT, which has allowed herders to migrate  between their winter and spring camps with fewer barriers. As a part of the 1,000 Families Project, apartments for 646 families have been commissioned. From 1990 to 2012, residential apartments for only 98 families were available in Uvs. A waste disposal site has been cleared and repurposed with the construction of townhouses with a well for freshwater supply. Aero Mongolia and Hunnu Air conduct direct flights between Ulaanbaatar and Uvs Province six days a week, allowing  tourists to make convenient travel plans, Uvs Province authorities emphasized. Bayan-Ulgii residents want a maternity hospital upgrade  During his working visit to Bayan-Ulgii, the Prime Minister learned that the birth rate in Bayan-Ulgii Province is higher than the average birth rate of the country. In 2012, 1,864 mothers gave birth at Bayan-Ulgii’s maternity hospital ward, whereas 2,108 gave birth there in 2015. Bayan-Ulgii authorities emphasized that the maternity ward of the province’s hospital should be upgraded to be an independent maternity hospital, as the birth rate in the province has increased, overwhelming the resources of the ward and its obstetricians and nurses. The maternity ward  had 32 beds, which was recently increased to 50. The province’s officials noted that the salaries of nurses and obstetricians should be increased to compensate for their increased workload, and asked Ch.Saikhanbileg to issue financing for a 50 bed-maternity hospital under budget amendments. Ch.Saikhanbileg told the province officials to make calculations for the cost of a new maternity hospital and the staff salaries and to get back to him in the near future. He promised to work on the issue in collaboration with the Ministry of Health and Sports and the Finance Ministry.
SHARE
Share on Facebook
Tweet on Twitter
Previous article Stay-at-home fathers caring for children to receive allowances
Next article GEC receives presidential candidates’ documents