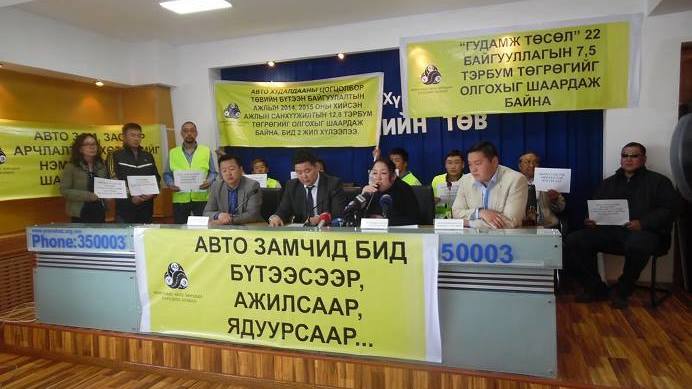 During a press conference held on May 13, Mongolian Road Association (MRA) representatives said that road workers will close certain roads if their salaries for work finished over the past two years are not paid by May 25. The MRA demanded that Ulaanbaatar Mayor E.BatUul, Minister of Finance B.Bolor, Minister of Labor G.Bayarsaikhan, and CEO of the Gudamj (Street) Project B.Batbold issue payment for labor provided for numerous projects. Head of the Mongolian Road Association B.Tserenpurev said, “Four committees have been assembled to protect the rights of road workers. Today, individuals who have worked on the construction of roads are working, creating, and growing poorer.” According to the representatives, four organizations are waiting on 12.8 billion MNT in payments which have been past due for two years, for work executed through a contract signed with Auto Trade Center under an Ulaanbaatar Mayor’s decree and City Council order. “The payment required for the work we’ve done is 12.8 billion MNT. In addition, 7.5 billion MNT for 22 companies working for the Gudamj Project hasn’t been resolved yet. We ask you to quickly resolve these issues,” said one of the MRA representatives. “We have built roads and worked outside from morning to night in harsh conditions to maintain the comfort and safety of the Mongolian public, and have contributed to the development of Mongolia. Because we haven’t received payment for the work we’ve already done, many have lost their job security and have been living without a salary. The companies have almost gone bankrupt because they haven’t paid their social and health insurance payments. To resolve this, we have sent demands to the government multiple times since May 2, but they haven’t answered yet,” said B.Tserenpurev. Gudamj Project representatives spoke to Gogo.mn and said that some of the contracted companies have received 100 percent of their payment, and some have received 85 percent. “The 22 companies who held the press conference have received 85 percent of their funding. They’re talking about the remaining amount of money. “Gudamj Project, as the customer, signed a trilateral agreement with Development Bank as the funder, and companies as the executors. The funding issue cannot be resolved solely from the project’s side, as it involves Development Bank and the Ministry of Finance. As for us, we’re trying to resolve the issue, and we have provided them with every document that we have to,” said a spokesperson for the Gudamj Project.
SHARE
Share on Facebook
Tweet on Twitter
Previous article Park to be built on area of 250 hectares in Bayanzurkh District
Next article Expansion of further cooperation discussed with the Asia Foundation