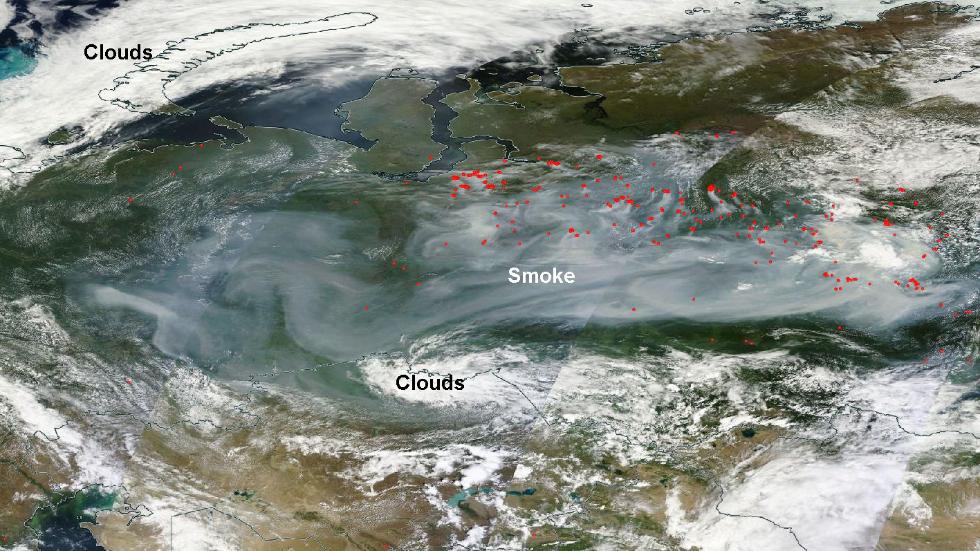 Smoke from wildfires burning in central and eastern Russia, stretching over 3,200 kilometers, is affecting air quality in Mongolia. Over the last few days, Mongolians have been concerned about the smoky skies, wondering what the cause of the poor air quality was. Local media spoke to the National Emergency Management Agency (NEMA) to find out more. NEMA said, “Currently, we haven’t received any information about fires in Mongolian territory. Ulaanbaatar is very smoky today. It may be due to wildfires in Russia.” The smoke from these recent fires is trapped under a dome of high pressure in the upper atmosphere. Air sinks under the area of high pressure, leading to stagnant weather conditions and causing the smoke to linger for days as the fires continue to burn. On July 18, the Government of the Russian Federation reported that wildfires covered around 116 cubic km, but environmental watchdog groups  say that the fires rampaging across Russia are being significantly underreported. According to a June 16th story published by The Guardian, Greenpeace Russia rejected the authenticity of the data in the government report and said that around 70,000 cubic km are burning. Climate change is making wildfires much more likely in Russia, but Greenpeace says that regional officials have been reluctant to report the true extent of the problem, and campaigners are warning that the harm to forests, property, and human lives could rise. Wildfires in Russia have burned up to 3.5 million hectares since the start of 2016, according to Greenpeace Russia. But the Head of the Federal Forestry Agency told RIA Novosti last week that only 669,000 hectares have been burned by forest fires in Russia this year, an increase from last year. Alexei Yaroshenko, Head of the Forestry Program at Greenpeace Russia, blamed chronic underreporting of the size of forest fires by local officials for firefighting delays and the allocation of less state funding to tackle the problem in the future. Alexander Krylov, an expert in the remote sensing of forest fires at the University of Maryland in the U.S., said 3.5 million hectares this year was likely to be accurate. Even the federal forestry agency’s online monitoring system reveals fires across far more territory than reported in its statistics, including large fires in the Kamchatka, Buryatia, and Irkutsk regions.
SHARE
Share on Facebook
Tweet on Twitter
Previous article Smartphone addiction harms children’s mental health
Next article The EU-funded ‘Sustainable Plastic Recycling in Mongolia’ project is helping to improve waste management in Mongolia