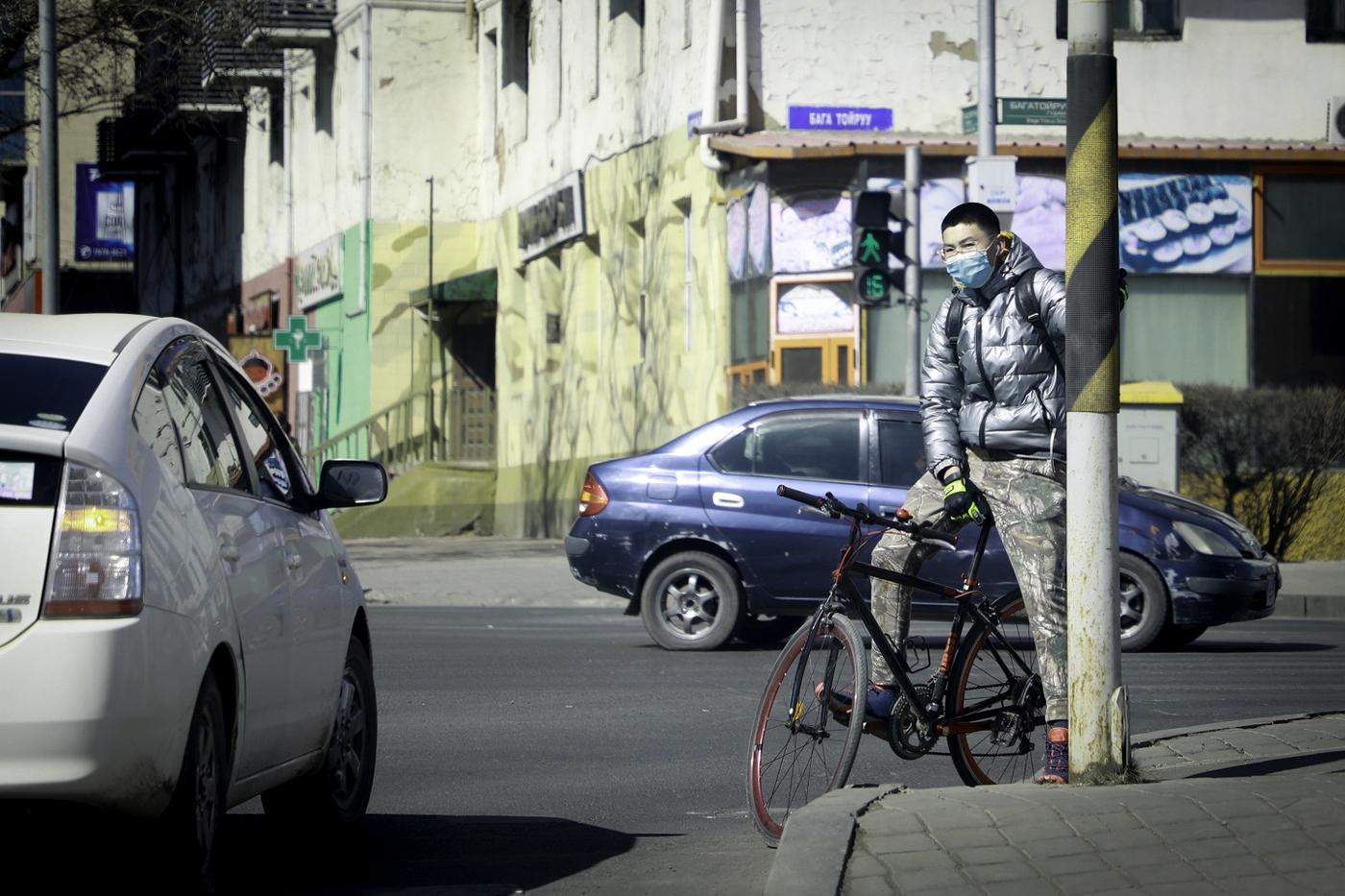 Should you listen to music while cycling?

As the weather warms up, we’re seeing many children and adults cycling outside, but their inability to steer away from music puts them at a great risk.
Mongolians often jest that you need to be a master to drive in Ulaanbaatar to avoid traffic congestion and accidents since the city traffic movement can be “wild”. In the midst of this battle of the fittest, we see cyclists weave through traffic and it is one of the most nerve-racking scenes in the world in my opinion. Just seeing them cycle in between cars, not knowing when a car would suddenly change lanes or emerge from an intersection, puts onlookers on the edge, but I guess this is not enough thrill for them. Nowadays, most people – whether they are a child or adult – seem to enjoy listening to music while riding a bicycle.
Starting from headphone to earphones and even earbuds, most cyclists in Ulaanbaatar have their ears blocked while weaving through the bustling city. City riding is inherently “risky” behavior to begin with, and restricting one of your key senses as well as blocking noises makes it perilous. Riding while listening to music can be construed as not only an unnecessary risk, but a selfish unnecessary risk.

A few days ago, I saw a young man riding a bicycle. He was wearing a helmet, sunglasses, and mask, which was commendable as it shows he cares for his safety. However, he was wearing earphones in and its cable was dangling in front of him. Chills ran down my spine at the thought of that earphone cable getting tangled with the handlebar or one earphone slipping out of his ear while he rides and causes an accident. The least he could have done was put the cable inside of his jacket to reduce potential risks.

No place to ride

A study conducted in the Netherlands has concluded that people who listen to music through earphones or talk on the phone while cycling is putting themselves at a much greater risk. Dutch researchers said that these behaviors could be stopping riders from hearing sounds important for safe cycling.

The paper titled “Mobile phone conversations, listening to music and quiet (electric) cars: Are traffic sounds important for safe cycling?” was published in Accident Analysis & Prevention. Its results suggested that even though listening to music or talking on the phone while cycling did not correlate with increased involvement in traffic incidents among teenage cyclists, it is still dangerous, especially in places with less cycling infrastructure than the Netherlands.

“Results show that listening to music and talking on the phone negatively affects perception of sounds crucial for safe cycling,” the researchers concluded. “However, taking into account the influence of confounding variables, no relationship was found between the frequency of listening to music or talking on the phone and the frequency of incidents among teenage cyclists.”

While there was no traceable relationship between listening to music or talking on the phone with increased traffic incidents, researchers believed this was due to compensatory behavior on the part of cyclists. Without the change in behavior or in places with less extensive and safe cycling infrastructure than the Netherlands, riding with music or on the phone still poses an increased risk.

This is an excellent point. It’s difficult to say that Mongolia has adequate cycling infrastructure, if any at all, considering that the total length of cycling lane in Ulaanbaatar is reportedly 84 kilometers. City authorities are planning to build 52.8 kilometers of cycling lanes this summer. But a quarter into the year, the project has just announced tenders for contractors.

“The project is running without any major problems. All works are resuming as scheduled,” assured A.Orgilsaikhan, a public relations officer of the Ulaanbaatar Road Development Department.

After finding a contractor, the project will need to clear areas for the cycling lane, construct it and landscape. These are long processes that make it hard to believe the project can be completed by the end of summer.

According to Bikemap, cyclists have discovered 433 routes across Mongolia and most of them are “of the hilly or uphill type”.

No rule against riding with headphones

Cycling is definitely a more eco-friendly, cheaper and healthier mode of transport as opposed to a car, not to mention being emission-free. However, it still requires the rider to follow traffic rules when participating in traffic movement for the safety of the cyclist as well as other participants.

I had a thorough look through the Law on Traffic Safety of Mongolia, but it doesn’t prohibit people from riding a bicycle while wearing headphones, earphones or earbuds. This is interesting because the law bans pedestrians and drivers from listening to music and talking on the phone while crossing the road for safety purposes.

In Mongolia, many children ride bicycles on roads. This is very dangerous as they have very little knowledge, probably close to none, about traffic rules and road safety. This is a comprehensive knowledge that people have to learn by attending driving courses or special classes on traffic safety. It is strongly advisable for parents and guardians to educate their children on road safety and make sure they ride bicycles safely and follow traffic rules.

For what it's worth, here are some provisions in the Law on Traffic Safety related to cycling.

Article 23.6. The following are prohibited for persons riding bicycles and mopeds:

a)   Leave free the rudders and ride without stepping pedals on;

b)  Goods should not be longer or wider than the cycle and moped dimensions for more than 0.5 m and the height of goods not higher than 1.5 m from the ground;

c)   Transporting passengers if there are no special pedals and seats for passengers (as well as on the platforms if they are designed for transporting goods);

d)  Transporting children under the age of seven without special fastenings;

f)   Drawing vehicles or being drawn by vehicles.

Another point I’d like to make is the lack of regulation on electric scooters. Scooters are becoming increasingly popular in Ulaanbaatar lately. They are fun to use but not exactly convenient as most users struggle to find a place to park them when they need to enter a building or shop. It is also difficult to decide whether it should be allowed on roads like bicycles. Given that it is a new technology and has a small number of users in Ulaanbaatar right now, authorities haven’t placed regulations for electric scooters. However, it will require attention in the future as the demand for and usage of electric scooters increase. Prevention is better than dealing with the consequences of being underprepared.

The biggest problem with resolving this argument is the fact that there are no data on cyclists' accident rates that compared headphone users with the rest.

Another study suggests that 3.9 percent of traffic accidents in Mongolia involve cyclists. The “White Book on Traffic Safety”, a comprehensive study by the Ministry of Roads and Transport Development, Ministry of Justice and Internal Affairs, and Ministry of Health, reported that 834 cyclists were injured or killed in traffic collisions in 2018, of which 620 were men and 164 women.

Contrary to popular opinion, some studies found that listening to music while cycling might not be as detrimental to your health and safety as some groups would have us believe.

A study by Dr. Katrina Jungnickel and Dr. Rachel Aldred found the use of music and headphones actually helped create a “sensory strategy” that enabled the cyclist to cope with riding in a dangerous environment by effectively calming the overload of sensory data. The research was conducted on urban cyclists and showed that they were just as aware of their surroundings, if not more so, than other transport users and engage in sensory strategies that manage their exposure to risk.

An Australian study supported this idea by concluding that a cyclist wearing ear-bud style headphones and playing music at a reasonable volume hears much more outside noise than a car driver — even when that driver has no music playing.

According to Dr. Costas Karageorghis of Brunel University, one of the world’s foremost experts in sport psychology, music is effectively a legal performance-enhancing drug. It may allow the cyclist to ride faster and increase their endurance, but the benefit of listening to music while cycling apply only to the rider. If the rider were to hit a pedestrian or another cyclist, the consequences would be greater than just simply taking off the headset.

A study by the same university, Brunel University, also implied that users were up to 10 percent less responsive to potential risks when riding with earphones, earbuds and headphones. Hearing is a crucial sense that alerts cyclists of potential dangers such as a car approaching from behind, another bike about to pull into a darkened intersection, and a child or dog about to run into the street.  Blocking your ears will prevent cyclists from hearing these alerts.

In conclusion, for their own safety and the safety of others, I advise cyclists against listening to music while riding as it will with no doubt mask some outside noises, which could give them an extra second to stop or prevent an accident from happening. It’s better to be overcautious and take off the headset rather than risking your health and safety. It makes sense to err on the side of caution. If you cannot give up music, wear only one earphone – it’ll allow you to enjoy music while being aware of your surroundings.