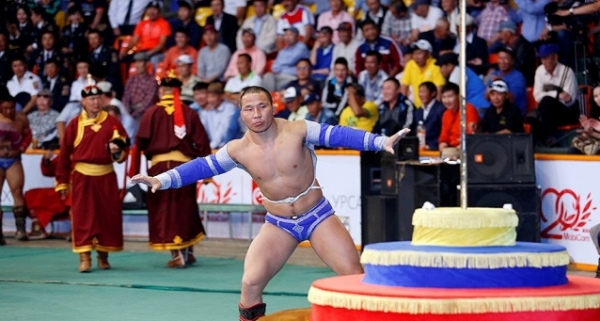 The President’s Cup for the 106th anniversary of the Declaration on the Restoration of National Independence of Mongolia was held at the Wrestling Palace on December 29, 2017. State Hawk from Tes soum of Uvs Province T.Baasankhuu won the President`s Cup 2017 after beating State Elephant from Mandal soum of Selenge Province N.Jargalbayar. The President`s Cup where 128 high ranking wrestlers, including State Garuda U.Bat-orshikh and State Giant Ch.Sanjaadamba, was held for the seventh year. The top 128 wrestlers ranked after 24 tournaments held throughout last year since the Lunar New Year participated in the President`s Cup. The wrestlers who remained in the last three rounds are shown below. 5th round 6th round 7th round
SHARE
Share on Facebook
Tweet on Twitter
Previous article Ts.Tsedev-Ochir: We will never give up
Next article Ex-Olympian Gan-Erdene inks Promotional pact