The development of contemporary technology has marked a new era of completely different media within the arts. It is interesting to see how contemporary artists so passionately immerse into new technological opportunities. “Savdag”, an independent exhibition by artist B.Bat-Erdene, is a clear example of graceful overlaying of the traditional and the cutting edge.

Mongolians have respected and worshipped nature as they consider that land and water have their own spiritual masters. Some researchers view that shamans originally conceived these invisible beings and gradually gave them form and began to worship them as spirits. The land spirits are called Savdag in Mongolia, while water spirits are named Lus. Contemporary artist B.Bat-Erdene created his own imaginary savdag in his new exhibition, using wood, wire, light and plastics.

The exhibition can make the audience feel as if they have been taken to a parallel world where the land spirits live. According to the Shamanist conception, mountains and hills are homes of savdags. However, it seems that B.Bat-Erdene aimed to depict their home as a special place between the earth and the sky.

The background music of his media art seems to convey the spiritual feelings and impression of meeting a real savdag, which allows viewers to spirit away from the actual world, even for a moment.

The artist portrayed the land spirit without eyes as Mongolians believe that the savdag has no eyes but can feel and find people who misbehave and disturb nature. All events related to the lus and savdag concern human attempts to balance man and nature, he says. Humans are in close contact with water and land masters and if they mistreat Mother Nature, people face the wrath of the spirits. Natural disasters such as drought, floods, dzud, famine, outbreaks of diseases, as well as man-made disasters such as war and conflict are all considered to be acts of the lus and savdag. Therefore, it is necessary to offer appropriate prayers and rituals to pacify these spirits, the Mongolians view.

B.Bat-Erdene said that the land spirits have the same mental and physical scars as humans. He created his works, imagining that they get scars due to people’s wrongdoings. The soil and stones are considered as the savdag’s veins, arteries, and muscles. For this reason, it was originally forbidden to destroy it, drive in a stake or erect a post unless it is needed urgently for reasons such as to tether animals. Any “wounds” caused to the earth by such actions were “healed” by filling in the stake or post-holes and returning the disturbed soil to its original state. In this manner, B.Bat-Erdene wanted to highlight the mental scars of savdags through his masterpieces.

Until recently, there were many stories and folktale about savdags pretending to be humans or animals in Khuvsgul Province, especially in mountainous taiga and forest localities, where shamanism was predominant rather than Buddhism. When I visited the East Taiga in 2020, a local shaman, Gerelee, said that the land spirit of the East Taiga has the shape and body of a cow and that not everyone can see or feel the savdag.

Interestingly, B.Bat-Erdene believes that the savdag is not related to religion but a manifestation of the Mongolian mentality.

The contemporary artist graduated from the School of Fine Arts of the Mongolian University of Arts and Culture with a bachelor’s degree in 2007. He hosted his first solo exhibition “Once in the Sky” in 2017 and featured his artworks in several domestic and international exhibitions. To meet his imaginary savdag and feel its unique world, make sure to stop by the MN17 Art Gallery before it wraps on March 22. 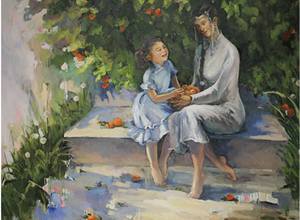