The War on Terror through the Mongolian lens 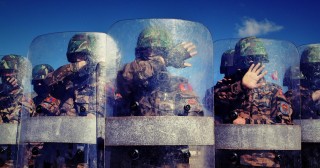 By HASSAN BUTT Since the dawn of McCarthyism, America’s policymakers have wandered around the pastures of minority politics like second-rate gardeners. If pundits have ever needed to search for a resurgence of anti-intellectualism and baseless smears in American politics, they may not need look further than the demagoguery of Donald J. Trump. But the veracity of much of the West’s political story goes much further than a few promised walls and a barrage of anti-Islamic and Mexican sentiment; its bludgeoning hilt, for too long now, has been the efferent "War on Terror". But what meaning, if any, does the "War on Terror" have for Mongolians? How does a country geographically withdrawn from the gamut of insurgent activity consume global narratives on terrorism? At first glance, the questions offered might seemingly function at a macro, geopolitical level. Yet Islam’s inclusion into the folds of an ongoing political rhetoric has at once grounded the issue as an equally communal one, and one that certainly requires positive, informed, and open-minded discussion. For Sarangua, a translator, reporter and former Foreign News Editor at NTV (Mongolia’s 4th largest television station), the coverage of terrorism is always a “shaky issue”.  This is primarily because NTV’s broadcasting standards mirror Mongolia’s widely held political stance on “neutrality at all costs”. For NTV, international news “has to be informative” and often there are domestic issues covered that broadly encompass national intelligence, disaster relief, and other security precautions. Yet, concerning Islam and its presence in Mongolian media, Sarangua conceded to the straight lines of censorship and sensitivity, “We receive world news, and we just translate it; BBC, the Agence France-Presse, and so on.” With regards to how that particular information is processed, Sarangua added, “We used to have a show called ‘World News Review’, where we chose one topic and usually included an interview with a political expert.” When asked if the "War on Terror" had ever been part of that review show, she responded, “No, maybe it’s too scary.” But what might this mean for Mongolia’s sparse Islamic community? Approximately three to five percent of Mongolia’s population is Muslim. The majority of this particular demographic is predominately Kazakh in ethnicity, widely populating the westernmost provinces of Mongolia. With Ulaanbaatar possessing almost half the country’s 2.8 million population, Islam is certainly one of the least domestically visible cultural components. For Fatima, one of Mongolia’s few converts to Islam, the preservation and portrayal of a harmonious, peaceful, and tolerant religion is of utmost importance. Fatima’s induction into her religion was twofold; she first had to educate herself, and then those who surrounded her. Seventeen years later, and she has certainly succeeded in the former. A keen linguist, she has gained fluency in various languages, including Arabic, Urdu, and Hindi. Her community efforts have shined through. In 2015 she crowd-funded Ulaanbaatar’s first Islamic library, and has spent her own money and time perfecting many Quranic translations from Arabic to Mongolian. With regards to the more media-focused, global aspects of Islam, Fatima spoke of great unhappiness, “This is just my opinion, but [news outlets] have often shown the bad face of Islam, making people enemies of each other for interest, never focusing on Islam’s message of peace.” On a domestic level, Fatima’s approach to the pressing questions of safeguarding national interests were forthright, “I agree that policy and intelligence must be correct. They may need to check us, people have jobs for that, it’s national security. But when you ask me, 'Why are you collecting these books? Why are you teaching Arabic? What are you going to do?' This is actually rude.” Her clear and concise insight into the Mongolian Constitution had echoed through at this point, “We have a constitutional right to the freedom of our religions. This should be followed.” Prompting the discussion of Islamic extremism in Mongolia, a slight reticence seemed to overshadow Fatima’s previous vigor, “This is not our job, and what can we do anyway? We don’t need to talk about terrorism, I always stay away from this discussion.” It had seemed more appropriate for Fatima to promote further unity with regard to the topic, “For me, I do not even engage in sectarian conflicts in Islam, if you are Shia, Sunni, whatever, it doesn’t matter to me.” She added that news is always difficult to deal with, but there are “better responses” to what is being seen. One of which might come from Fatima’s own efforts. In 2015 she spent one week translating the film "My Name is Khan" from Hindi to Mongolian, in hopes of spreading the film’s message of religious tolerance. It is certainly evident that differing realities persist as the narrative of global terrorism shifts beyond its own discursive boundaries. In the Mongolian context, there may not be any substantive remnants of a fearsome "War on Terror”, there may even be very little collective apprehension of the threats that seem so relevant to a progressive and expansive "West". And although the shelter of ambiguity may cause no direct harm by remaining intact, it may eventually need to come undone in order to uphold the same practices of neutrality.
SHARE
Share on Facebook
Tweet on Twitter
Previous article Will the Constitution be amended again?
Next article Examining the effectiveness of hunting quotas for rare animals