Thousands of empty shoes stand in for protesters 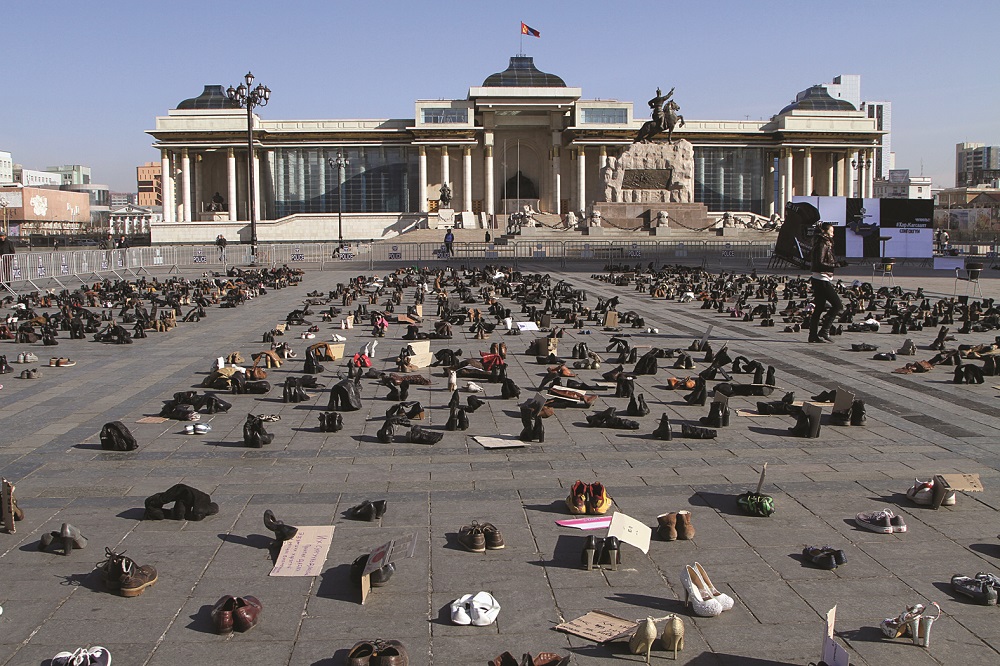 Mongolian Youth Federation (MYF) is continuing its national Thief-free Mongolia movement and held "Shoe Protest" at the Central Square yesterday. Empty pairs of shoes were placed on the ground to address an issue or suggestion, reflecting the MYF's concerns about human rights and current events. Thousands of students and youth have joined the Thief-free Mongolia movement to  express their views on social and political issues. The Mongolian Youth Federation published a list of 100 "black" events that have occurred in Mongolia since 1992, events which the MYF believes have threatened national security and ideology, the interests of the nation and region, the environment, and social values. Through the movement the MYF says it hopes to eliminate existing inequality in today’s society and to shape a responsible Mongolia with no thieves or  hypocrites active in politics. During the protest, the President of the MYF said, “Today I am officially announcing the list of 100 black events that have occurred in Mongolia since 1992. I call on the nation to not elect thieves and hypocrites who have initiated, been involved in, and carried out these 100 happenings in the 2016 parliamentary and local elections. "Many people have the same position as us, however, they are not letting their position be known out of fear. Around 3,000 pairs of shoes were collected within a couple of hours. Every pair of shoes has its own rights, and every shoe has something to say. Behind every pair of shoes there is its owner. Today, Mongolian society is under fear and the state is hindering citizens’ rights to state their opinion. That’s why the shoes' owners did not arrive in person.” General coordinator of the National Center Against Disaster J.Ganbaatar joined the protest. He said, “I am including my favorite boots in the shoe protest. I was wearing these shoes three years ago when I entered a landfill for radioactive waste. I have not worn these since then, and they still have mud remains stuck to them. I wanted to use my boots to warn people about the danger of uranium that is knocking on Mongolia’s doors.” One protestor said that he joined the protest to let politicians know that the nation has the right to impeach MPs, as the nation elects politicians to represent the voters of the nation. He said, "The protest can be carried out without chaos, expressing thoughts in a peaceful way is also important.”
SHARE
Share on Facebook
Tweet on Twitter
Previous article Smartphone addiction harms children’s mental health
Next article The EU-funded ‘Sustainable Plastic Recycling in Mongolia’ project is helping to improve waste management in Mongolia