During the parliamentary plenary session on October 21, newly-elected lawmakers Ts.Iderbat and E.Batshugar took an oath to Parliament, and their mandates were ratified.

During the session, Head of the General Election Commission P.Delgernaran presented the by-elections’ results. He noted that the parliamentary by-elections and additional polling, held in Songinokhairkhan District and Khentii Province on October 10 and 16 respectively, were conducted in accordance with the Law on Parliamentary Elections.

In connection with the by-elections’ results, some parliamentarians expressed their views. Lawmaker N.Altankhuyag emphasized that if the election had been organized fairly, the results would have been different.

Legislator D.Ganbat stressed, “This was not an election. It wasted away people’s money.”

DRAFT AMENDMENT TO LAW ON STRUCTURE OF GOVERNMENT SUPPORTED

Parliament decided to discuss draft amendments to the Law on Structure of Government, Law on Composition of Government and Law on Government of Mongolia during its plenary session.

Article 25 of the Constitution of Mongolia states that development policy and planning shall be sustainable. In accordance with this article, the government believes that there is an urgent need to establish a state central administrative body responsible for implementing the Law on Development Policy, Planning and Management; providing unified management, organization and methodology; and organizing development policy and planning activities at national, regional and local levels.

Lawmaker S.Chinzorig underscored that the Ministry of e-Development’s mandate should cover four issues. Macroeconomic issues such as concessions, foreign aid, public and private sector, integrated light and heavy industry, job creation, and poverty reduction should be within the ministry’s mandate, he said.

“Issue related to the internet should not depend on other countries. An IT park needs to be established. The Ministry of e Development should be responsible for the privacy and accuracy of information,” parliamentarian B.Enkh-Amgalan highlighted.

Legislator O.Tsogtgerel mentioned, “The cost of the two ministries and their four agencies will be 40 billion MNT according to the bills. The two agencies planned to be set up as ministries are under the direct control of the prime minister. If these ministries are established, we will have to remove two other ministries.” 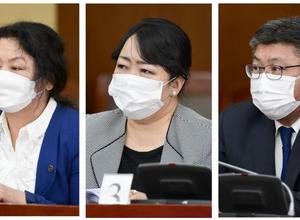