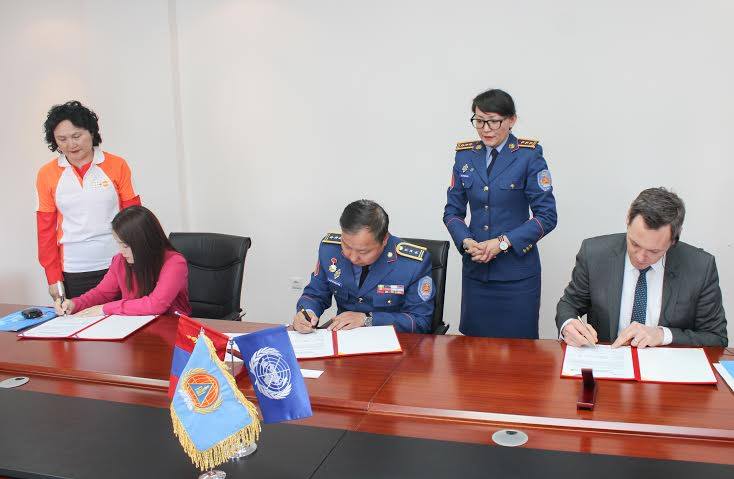 The United Nations (UN) allocated 2.4 million USD from its Central Emergency Relief Fund (CERF) to Mongolia in response to the recent dzud disaster that has directly affected the lives of as many as 63,000 nomadic households in Mongolia. As part of this assistance, food, nutrition packages, and hygiene kits were handed over on Monday to the National Emergency Management Agency (NEMA) for immediate distribution to women and children in affected communities. The UN Children’s Fund reports that since last December, an estimated 41 percent of the total herder population have been affected by harsh winter weather conditions involving extreme cold and compact layers of snow, which are locally known as dzud. Out of this, an estimated 11,800 herder households with less than 100 animals in the most affected districts are considered particularly vulnerable. Over 1,800 children under five years old and more than 900 pregnant and lactating women in 45 soums in six provinces, including Uvs, Bayankhongor, Arkhangai, Zavkhan, Dundgobi, and Sukhbaatar, are targeted to receive the UN packages. UNICEF, in collaboration with the Ministry of Health and Sport and World Vision International-Mongolia,  is providing food and nutrition intervention to ensure food security for the affected households and to prevent micronutrient deficiencies, particularly among vulnerable children, and pregnant and lactating women . The nutrition component of provided assistance covers the supply and distribution of multiple micronutrient supplements for children aged 6 to 59 months old and pregnant and lactating women in target soums and provinces affected by dzud. The UNFPA has provided 7,962 Dignity Kits, two kits per household, to the women and girls in the affected areas, which include sanitary supplies, underwear, clothes, socks, towels, soaps, and protection items including whistles and flashlights with batteries.  The kits are intended to preserve an appropriate level of sanitation for women and girls, as well as provide for their health, safety and dignity. The UNFPA has also extended support to soum health centers so that an estimated 500 pregnant and post-partum women will be able to receive ante-natal care and other reproductive health services in the affected areas. “In any emergency, women and children are the most vulnerable. Children are especially vulnerable to disease and malnutrition. Extreme cold poses an increased risk of Acute Respiratory Infections (ARI), pneumonia, and other infectious disease (measles and chickenpox) among children, as their immune systems are lower due to under nutrition,” said Roberto Benes, UNICEF Mongolia Representative, and added that micronutrient supplements are important in reducing maternal and child morbidity and mortality in dzud affected areas. Upon the receipt of assistance from the UN, Foreign Affairs Minister L.Purevsuren received Roberto Benes. Benes gave an overview of the new Country Program Document of Cooperation between the Government of Mongolia and UNICEF for 2017 through 2021. Minister L.Purevsuren underlined the importance of UNCIEF’s support and assistance to Mongolia, which has contributed to the promotion of children’s rights, basic social services, and encouraging child and youth participation in their communities. The Foreign Minister emphasized that the new Country Program for 2017-2021 to be approved by the UNICEF Executive Board in September 2016, is important in implementing the long-term sustainable development vision of Mongolia.
SHARE
Share on Facebook
Tweet on Twitter
Previous article Park to be built on area of 250 hectares in Bayanzurkh District
Next article Expansion of further cooperation discussed with the Asia Foundation