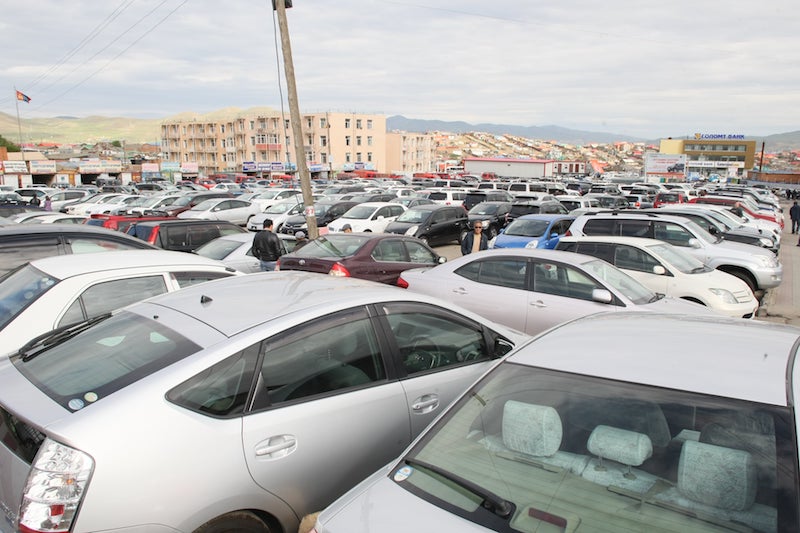 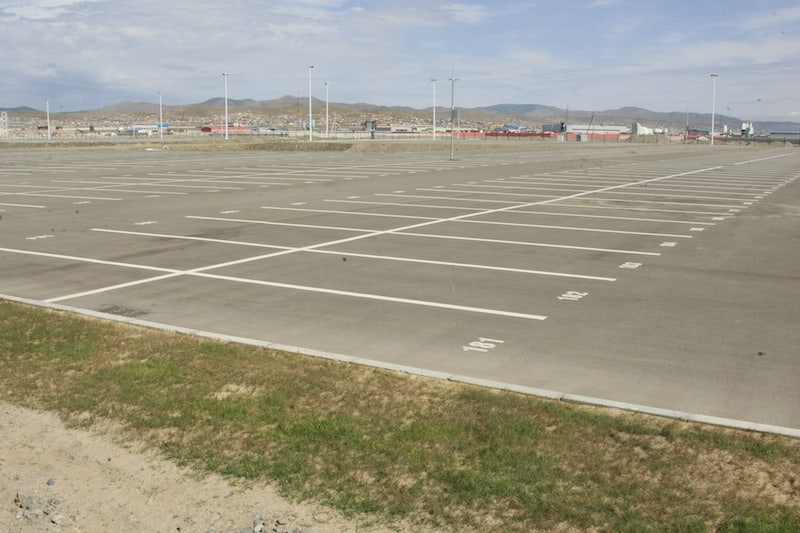 A giant car park lies empty and desolate on the western outskirts of the city, while the shabby auto markets in the east of Ulaanbaatar are swarming with buyers and dealers. One of the biggest headaches the new city authorities have inherited from former Mayor E.Bat-Uul’s controversial administration is, without a doubt, the issue of the Auto Mall. Located at the southern end of Auto Checkpoint No. 22, on the western outskirts of the city, Auto Mall opened late last year in an attempt to alleviate traffic congestion caused by vehicle and auto parts sales operating throughout Ulaanbaatar. Da Khuree, Uguumur, and other auto markets around Ulaanbaatar were supposed to close their operations by April 1 and businesses were instructed to move to Auto Mall, but not much has changed since the mall opened.

Newly built Auto Mall in western Ulaanbaatar is empty on July 2016[/caption] Car dealers complain that last year was particularly bad for business, with many dealers having to sell off their goods for less than what they paid to import them to avoid bankruptcy. But business looked to be thriving at Da Khuree this week, with potential customers flooding the market from every direction. According to former city administrators, auto markets contribute a great deal to the city’s traffic congestion. Auto Mall was the solution to the ever-present issue, but at the moment, it looks more like another problem. Car dealers say that the rent at Auto Mall is high and that it is too far away for city residents, and generally bad for business. Former Mayor E.Bat-Uul’s administration wanted to raise licensing fees and taxes on car dealers operating inside Ulaanbaatar to push them to move to the new Auto Mall. The fairness and legality of such action has been questioned by many in the past, with critics saying that if the city administration wants to uphold democratic free market values, it should entice dealers and traders to relocate to Auto Mall with benefits and advantages, rather than coercing and strong-arming existing businesses in the field. I agree with this sentiment. It is no surprise that the issue has been left unaddressed for so long. With the election taking place this summer, the city's administrators were probably too busy campaigning to spare any attention for the Auto Mall issue. According to the former administration, the 25 hectare Auto Mall (built to accommodate over 40,000 vehicles) was supposed to lower traffic congestion in the city by more than 20 percent. As of now, Auto Mall hasn’t impacted congestion at all. The head of Auto Mall, D.Baidrag, said that all of the necessary connections for vehicle sales and purchases have been resolved at the mall, and space has even been prepared for a railway loading dock for imported cars. “If open sales of auto parts and vehicles isn’t stopped within the city, there is no point in improving state services and facilities at the mall,” he said. He said that all the state services required for registering vehicles and transferring ownership have already been set up, but the mall doesn’t have car dealers operating there. The idea of Auto Mall is commendable. Building a central complex for all auto trade and services sounds convenient and logical, so why did the plan fail? It's simple: because the state bodies involved in establishing the center failed to listen to or include the proposals and views of those operating in the industry, the car salesmen and auto parts traders. The city's authorities did not ask business owners if they wanted to move, or give them any options as to which locations they might favor. They simply went ahead and built a great big complex that could potentially house all the auto trading businesses in Ulaanbaatar without consulting the people who were actually supposed to operate businesses there. This is a huge failure on the part of the city. Now we are left with a large, clean, and open parking lot for trading vehicles and auto parts at a place where nobody wants to do business. There is no logical solution to the problem right now. The city can’t just strong-arm businesses to make them move wherever they want if commerce is to thrive in Ulaanbaatar. Business owners and traders need to be given the freedom to operate where they want and to decide how they want to conduct their operations. The only thing the new city authorities can do now to address the issue is to hold discussions with industry representatives and consult with them on the best way to address the issue.
SHARE
Share on Facebook
Tweet on Twitter
Previous article Smartphone addiction harms children’s mental health
Next article The EU-funded ‘Sustainable Plastic Recycling in Mongolia’ project is helping to improve waste management in Mongolia