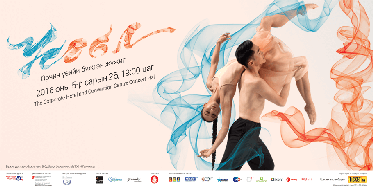 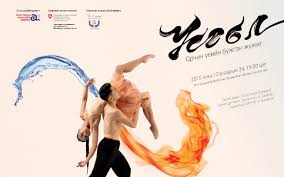 By LILA SEIDMAN Wednesday’s “Aquafire” contemporary dance production at the Corporate Hotel Convention Center delivered on its namesake: the minimalist production simmered coolly. Just three dancers (and one cellist) performed amidst digital backdrops, including clouds and fire, and a finale of fake, glittery snow. Water meets fire. There are no floods or conflagrations. The elements, embodied by lead dancers Odbayar Batsuuri and Ganchimeg Choijilsuren, negotiate a functional coexistence – they fall in love – challenging perceived differences between fire and water, men and women, traditional society and contemporary society and other commonly accepted“binaries.” To create “Aquafire”, the Arts Council of Mongolia organized a collaboration between Batsuuri, a young choreographer and member of the Hedwig Contemporary Dance Company in Chicago, composer Purevsukh Tyeliman, filmmaker Ikhbayar Urchuud, Swiss trumpeter Matthieu Mitchel and American stage and light designer Barry Steele. The shift in Mongolia from a patriarchal to ideological to democratic society, the creators argue, have given rise to a country “still struggling to find a balance between the different value systems that co-exist.” The choreography “draws on the tensions between generational views of gender, how we come to perceive who we are and the relationships we create with one another.” The show is particularly concerned with the exploration of young Mongolian women’s lives, and the social pressures they bear in today’s society. The creators note that although the show was born from a uniquely Mongolian perspective, love and gender norms are a universal concern and therefore it is relevant to all audiences. While these complex themes are difficult to perceive in the production in full, there are telling moments conveyed by the dancers’ movements. Leads Odbayar and Ganchimeg are almost constantly entwined – visibly blurring the lines between their male and female bodies. Ganchimeg contorts her petite feminine frame into angular positions, eschewing the stereotypical rounded feminine “ideal”. Their pas de deux comes off as more tender than sexual. Odbayar and Ganchimeg frequently control each other’s bodies, with one taking the other’s arm, leg, waist or even head and moving it to a new position; neither has complete control. Rather, the power balance and dominance shifts throughout the hour-long, three-part performance. At different times in the production, the two appear to kick each other, sending the other one tumbling backwards. In the second sequence, “Aqua falls in love with fire,” cellist M.Khandsuren waxes poetic in front of a video art installation depicting famous couples throughout history. Men’s faces (on the left) and women’s faces (on the right) morph from one pair to the next, distorting facial features until they settle into the appropriate portrait. There is Chinggis Khan and Borte, Frida Kahlo and Diego Rivera, Audrey Hepburn and Mel Ferrer, and many others. The dance “travels through time searching for the ideal soul mates,” the creators explain. At face value, the sequence can be interpreted several ways – as a simple meditation on love everlasting (as I understood it) or as a deeper reflection on shifting romantic values and gender roles throughout history, as the creators intended. A majority of the featured music errs on the classical and melodic side, including Franz Schubert’s Piano Trio in E flat in the first act, but the second to last number shifts dramatically into electronic dance-inspired music. The digital backdrop follows suit, featuring geometric shapes and pulsating silhouettes of dancers. Several attendees I spoke with stressed the novel nature of the production. Its combination of modern dance and video art to convey controversial themes intrigued both locals and expats, many of who had never heard or seen anything like it in UB. The finished product fell short of my expectations, which were stoked by the buzz around the production. The dancers maintain a rigid expression throughout, and there seems little apparent emotional chemistry between the leads. But the spirit and heart – thematically boundary-pushing and aesthetically experimental-leaning – was a refreshing break from more traditional productions. It was thought provoking, if not always visually riveting or moving.
SHARE
Share on Facebook
Tweet on Twitter
Previous article Viewing rural life from children’s perspective
Next article ‘Fantastic Creatures’ art show on display