Through the Friendly Ulaanbaatar program, Russian pop-rock band Zveri will perform a concert in Mongolia on September 2 at the Central Stadium. The band was invited to perform in Mongolia by SHAMK Entertainment and AIST television channel. The concert aims to promote the efforts for saving the mazaalai (Gobi bear) under the motto “Zveri Will Sing for Mazaalai”. Mongolian live music bands A-sound and Rec-On, as well as rappers Gee, Lumino, and Amaraa of Khar Sarnai (Black Rose) will also perform at the concert. DJ Anna, BTB, Agvaan and Batbold will play their sets at the event as well. The Russian Center ofScience andCulture and Ulaanbaatar City Tourism Department are supporting the concert. The ticket prices for the concert cost 10,000 MNT, 15,000 MNT, and 200,000 MNT (VIP). Zveri was formed in mid-2002 by Roman Bilyk, the lead singer ofthe band, better known as Roma Zver’. The band was named after his nickname. He was soon joined by Maksim Leonov on the guitar, Kostya Labezkiy on the bass, Kirill Antonenko on the keyboard and Misha Kraev on the drums, and the group began work on their debut album “Golod” (Hunger), released in February 2003. To date the band has released four albums. Zveri song “Kvartira” was featured in the Grand Theft Auto IV video game.
SHARE
Share on Facebook
Tweet on Twitter
Previous article Ts.Sukhbat: I aim to be one of world’s best athletes
Next article N.Altanshagai carves adorable animals out of wood 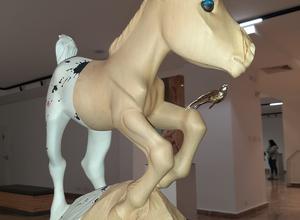